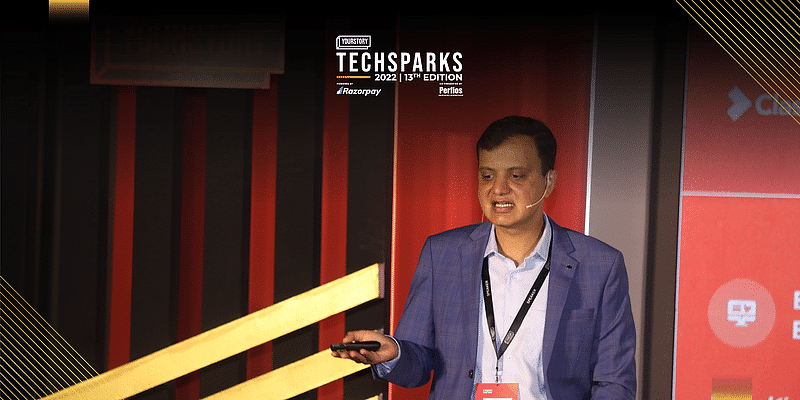 Edtech in India has fast become a buzzword that everyone seems to want in on. Increasing tech penetration and changing attitudes towards digital learning have enabled the sector to show phenomenal levels of growth over the past couple of years, making it one of the fastest-growing sectors in the country. The sector was valued at $750 million in 2020 and was estimated to reach $4 billion by 2025 at a CAGR of 39.77 per cent.

However, the sector’s profits seem to have plateaued — or even plunged — now that classrooms have opened doors and schools have begun to offer their material online. In such a scenario, how can edtechs continue to offer their services at scale in a way that is both sustainable and profitable? Ujjwal Singh, CEO, Infinity Learn, tackles this question in his keynote address on Building Edtech at scale at TechSparks 2022.

“10x growth is more important than profitability,” said Ujjwal, as he recounted a story from the life of the Indian educator and social reformer Ishwar Chandra Vidyasagar. From a young age, Ujjwal knew he wanted to pursue a career in business and he continued along the path to profitability. Profitability as a concept remained with him until 2021 when Infinity Learn was launched.

Ujjwal highlighted some learnings he took away from the founder of a well-known edtech company. First, he said, was to not sponsor an IPL. Ujjwal said this has a deep meaning as it says: “don’t try to run behind the brand. The brand will get built”. Since education is a credible business, this can cause a credibility issue.

His second learning was about how “tech giants take away 50 per cent to, sometimes, 100 per cent of money generated from the students”. This is linked to the money that many edtechs spend on a few companies they are dependent on for lead generation.

Something Infinity Learn realised very soon in their journey was that edtech does not need to mean both generating leads and delivering digitally. “Edtech means delivering digitally; leads can come from any medium,” Ujjwal said, adding that there is value in this because when edtechs have less money, they will focus on continuous innovation even at scale.

Ujjwal emphasised the value of remaining frugal, which Infinity Learn unlocked early in their journey. In his opinion, even hiring 20 people who aspire to build something is enough to kick-start operations in any company, Ujjwal believes that, if a company wants to be profitable and sustainable, and not worry every day about whether they’d still be operating if the next round of funding doesn’t come through, then they need to remain frugal.

Ujjwal shared that their most important idea was focusing on student progress and success, and not just teaching. Their approach is, he said in Hindi, “baccha seekha ki nahi?” (“did the child learn or not?”), adding that Infinity Learn’s focus is on delivering progress every time a child logs onto their platform. This became part of their culture too, where every meeting would begin with the same thought – did the child learn or not?

This approach brought early results to the company when four of their students cracked JEE ranking under 10,000, and five others ranked under 15,000 in NEET. Ujjwal is confident that they can replicate this learner-focused approach even at scale.

“‘Let the learner choose where they want to go’, that is the genesis of our success,” he said. He summarises that if edtechs are not profitable, their existence will depend on someone else; if they aren’t frugal, then remaining profitable is very difficult; and if they aren’t learner-focused, what are they doing this for?

Previous post How to Reverse a Video on Snapchat
Next post How to Establish Your Personal Brand Online: A Guide for Emerging Journalists