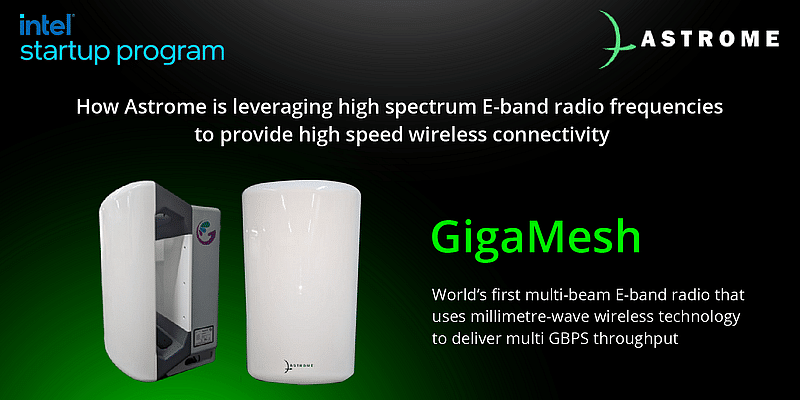 With 5G network adoption well on its way, both globally and in India, a number of stakeholders have been working to build the infrastructure it needs. The impact this would have on global communication networks is huge: not only would it enable wireless data transfer at speeds of around 10 GBPS — 100 percent faster than existing 4G networks — but it would also play an important role in edge computing and IoT solutions for a number of industry verticals.

Building the backbone of 5G are technology infrastructure providers. With the global services market for 5G technology estimated to be worth $83.24 billion in 2021, it’s expected to grow at a CAGR of 23 percent to reach $188 billion by 2025, according to PwC.

Disrupting this space is Astrome, a deep tech startup that has built the world’s first multi-beam E-band radio that works on the 71-76 and 81-86 GHz spectrum. Called GigaMesh, the radio is a backhaul unit that telecom network providers can utilise to provide wireless, high speed internet connectivity even in rural areas, without the need for laying down fibre optic cables.

Astrome founders Dr Neha Satak and Dr Prasad Bhat bonded over their shared passion for space technology while working on a student satellite program while studying at the Indian Institute of Science (IISc). The two parted ways to pursue their PhDs — while Neha moved to Texas A&M University in the US, Prasad stayed back at IISc, and in the final year of this doctorate research founded a company called Streamoid Technologies that leveraged AI for fashion retail cataloguing. Meanwhile, Neha also began her own company developing asteroid deflection technology.

The two founded Astrome after a conversation over the network connectivity gap in India between the urban and rural areas, and deciding that they could do something about it. “Prasad and I thought of starting Astrome to solve a pressing problem of connectivity prevalent globally . Given our skills in developing disruptive technology, we were confident we would come up with a solution which could revolutionise high-speed internet at much lower CapEx and OpEx,” Neha says.

The duo soon brought on board Dr Arvind Iyer as Director of Satellite Engineering, who along with Neha and Prasad, is part of the core technical leadership team, and Kumaran Venkatesh as President of the company. While Arvind also has a PhD from IISc, Venkatesh has over three decades of experience in consulting, business development, sales management, and operations, and executive leadership roles across the IT and semiconductors industry.

Astrome’s use of the E band frequency helps networks and countries adopt 5G technology quicker, thanks to its multi-band capabilities. “In most countries, these frequencies [on the E band] are either light licensed [non-exclusive licences to networks] or unlicensed, as they can be reused heavily, This is one of the main reasons for its growing adoption. GigaMesh works in the same E band and is the only one in the world to provide Multi-link capabilities in this band,” Prasad explains.

The technology is especially useful for network providers in rural parts of the country, where building fibre infrastructure such as cables and towers can be expensive. Venkatesh says, “In the current 4G infrastructure globally, about 80 percent of towers in developed countries are connected with fibre and it’s only 30 percent in developing countries. With 5G coming in, the number of cell towers will increase at an exponential rate. It will become more and more impossible to connect every tower with fibre. There is a need for wireless technologies that can deliver fibre-like data speeds at lower cost than fibre. This solution can help distribute fibre capacity from cities to nearby towns and villages, especially in the emerging markets.”

Apart from being incubated by IISc — who were also the company’s first funders — Astrome has partnered with a number of global space tech organisations such as Methera Global and SatixFy, and communications technology firm Cisco to develop solutions for. Their latest tie-up with the Intel Startup Program will help Astrome with the hardware they require to scale their solutions, as well as help their business model.

Neha says, “We are very excited to be a part of the Intel Startup Program. We can leverage the tools and mentorship provided by Intel to enhance our products further and improve our technology. We are looking forward to working with the team,” while Sanjana elaborates, “Our entry into the Intel Startup Program is fairly recent. We plan to create a deep partnership with Intel to address the 5G enterprise connectivity market with our technology. Astrome’s next-generation products will have Intel inside.”

Astrome’s mentor Sriram Natarajan, Design Automation Project Manager, Intel adds that the company’s multi-beam E-band technology stands out from other startups in the E-band RF (radio frequency) and microwave communication equipment space, and can be scaled for fronthaul, midhaul, and backhaul applications at lesser cost.

“They have a strong technical team and they understand the need of Intel FPGAs (field-programmable gate arrays) for their end product. Collaboration in hardware equipment and software stack discussions could help Intel customers for future deployments. We are helping Astrome compliment their Intel Communication Portfolio by working with them for E-band based XHaul solution architecture, specifically, ease of deployment, connectivity range, and target solution cost in focus. We are also helping them re-target their solution using Intel Agilex family of FPGAs and Xeon which can complement future RF offerings from Intel,” Sriram says.

Setting up to succeed

Even though Astrome is still in the early stages of commercialising their product, the startup has already been recognised with awards and grants, such as the IDEX DISC 1 grant from Indian Army for GigaMesh, Most Promising Aerospace and Defense Startup Award, 2016 by NASSCOM and IESA, United States-India Science & Technology Endowment Fund given by Indo-US Science and Technology Forum (IUSSTF) in 2017, and was also selected to participate in Unreasonable Future Program organised by Unreasonable Group, Fossil Foundation, Accenture and Pearson.

The Intel Startup Program is Intel India’s flagship program to engage with technology startups who have an IP or innovative solutions that have the potential to create impact on customers and align with Intel’s focus areas. The program is at the forefront of engaging with India’s startup ecosystem through high impact collaborations with the industry, academia and government, and runs multiple initiatives that are either vertically aligned or focused on emerging technologies.

It engages with startups that have a unique global or local value proposition to solve genuine customer problems, enabling them with domain and business expertise from the industry and mentorship from Intel.

Previous post How to Change Cameo Selfie on Snapchat 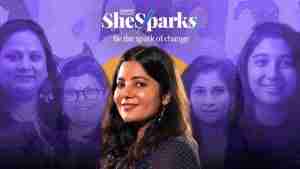